The Royal Insitution of Chartered Surveyors has updated its External Wall Systems 1 (EWS1) form with the agreement of lending bodies to reflect new ‘proportionate’ fire safety guidance backed by the government. 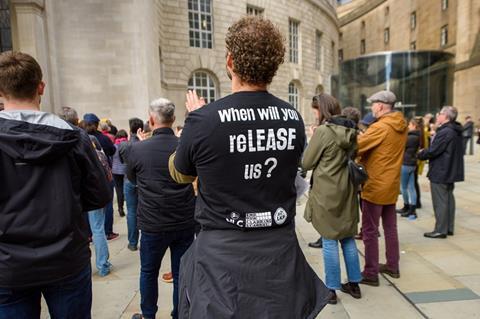 The move is intended to be a step towards ending the situation in which tens of thousands of leaseholders have had trouble getting their homes valued or mortgaged due to concerns about onerous requirements for the EWS1 building safety information form. The move is backed by mortgage lending bodies UK Finance and the Building Societies Association, says RICS.

The forms have been altered to say investigations carried out as part of the EWS1 process should be in accordance with the new PAS9980 standard produced by the British Standards Institute and published in January.

This follows the government removing its consolidated advice note which had been widely interpreted as urging the use of EWS1 forms on all residential blocks.

The PAS9980 sets out a method to conduct and record fire-risk appraisals of external walls, through a five-step risk assessment process to assist in the identification of risk factors. The BSI has said not all buildings will require an appraisal or an intrusive inspection.

The new EWS1 form also make clear that those who have completed an EWS1 assessment training programme can complete the forms. The forms have also been made electronic and have had a “version control” function added to make clear the audit trail for completed assessments.

However, all previously completed EWS1 forms will remain valid until a new form or updated fire risk assessment has been carried out. Changes to regulations under the upcoming Fire Safety Act mean that the ‘responsible person’ for fire safety needs to undertake assessments of external walls, including cladding systems, on all blocks. Charles Roe, director of mortgages at UK Finance, told parliament last month it would take a number of years to get FRAs completed.

It is expected that EWS1 forms will continue to be used until fresh assessments have been carried out on all blocks, after which time they will ‘drop away’.

A RICS spokesperson said: “The EWS1 form and guidance remains under constant review to ensure that a proportionate approach is taken to help ease the impacts on leaseholders from combustible cladding, while ensuring that lenders and valuers meet their legal requirements to accurately report property values.

“As more fire risk assessments are carried out under the PAS9980, with EWS appraisals, RICS envisages the need for an EWS1 form to drop away.”

RICS says its current advice to valuers, which recommends the use of EWS1 forms on some blocks, remains valid but is under review. This is despite criticism by the government for retaining the advice. It had been hoped that use of EWS1 assessments by lenders and valuers would fall away with the cancellation of the Consolidated Advice Note.

RICS has however added a ‘boilerplate’ to its guidance document making it clear the guidance was drafted with reference to government guidance which has now been replaced with the publication of PAS9980.

Then housing secretary Robert Jenrick last summer called for EWS1 forms to be ditched entirely, but lenders were reluctant to do so unless the government withdraw its CAN and RICS updated its guidance.

Last week the Home Builders Federation, British Property Federation and the Housing Forum warned of little progress being made on shifting to a more proportionate approach to valuations and called for government intervention.