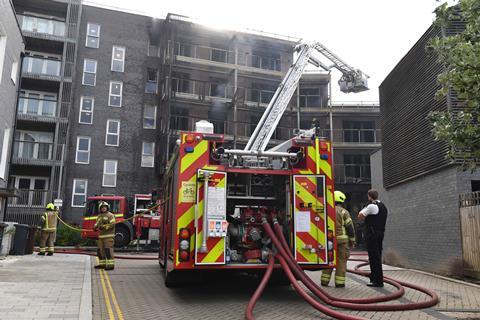 Investigators are seeking to find out why a fire ripped through a housing development built by Bellway in east London over the weekend.

Around 20 flats in the six-storey complex in Barking were destroyed in the blaze, which was fought by 100 firefighters. Two residents were treated on the scene for smoke inhalation but there were no other injuries reported, according to the emergency services.

According to press reports residents had previously expressed concerns about the safety of the flats and the risk of fire spreading.

Stories are circulating that the wooden balconies on the scheme exacerbated the blaze.

Peter Mason, chair of the Barking Reach residents’ association, told the Guardian he had contacted Bellway to ask for the fire risk to be looked into after BBC Watchdog programme broadcast claims of fire safety problems at two other developments by the same builder.

The speed in which this fire in #barking spread was crazy! Nothing learned from #Grenfell #barkingfire pic.twitter.com/5mdceE4pAS

Mason told the newspaper a fire warden had been employed to carry out patrols because of unspecified concerns about fire safety.

Twitter users were claiming Bellway had said the wood used on the scheme was “fire-retardant and perfectly safe”.

London mayor Sadiq Khan labelled the blaze “shocking”. He said the fire “could easily have resulted in fatalities and I am grateful to the London fire brigade and the local authority for acting as quickly as they did.

“This incident highlights both City Hall’s total lack of powers over private building owners and the woefully slow response from the government and developers to the tragic fire at Grenfell – two years on residents in blocks of flats are still living in fear that their buildings are unsafe.”

In a statement Bellway said: “We are taking the matter very seriously and working with all parties to help in establishing the cause of the fire.”