Planning inspector gives go ahead for 162-homes scheme in Enfield

Connected Living, which is a long-term housebuilding joint venture between Transport for London and Grainger, can now go ahead with its scheme of four buildings on two sites that are currently pay and display car parks. 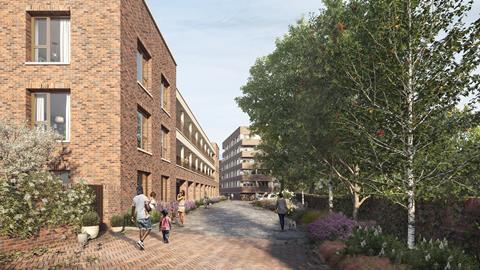 The partenership has gained permission for other schemes in the past couple of years, such as 460 homes in Southall and 139 in Kennington.

In January last year the council refused persimmon for the Arnos Grove Station scheme because of the loss of station parking, its proximity to the Grade II listed underground station and objections to the proposed mix of housing. The car parks have space for 297 cars.

But inspector David Prentis concluded “the great majority of car park users would be able to access either Arnos Grove, or an alternative underground or train station, either on foot or by bus”. He added: “I consider that the scale and massing of the proposed buildings would respect the listed building and preserve the primacy of the booking hall.” Prentis also concluded: “Whilst the appeal scheme would not provide any social rent units, it has been demonstrated that the proposed mix of discounts is the maximum level of affordability that the scheme could support”.

Prentice also said because 40% of the homes in the scheme would be affordable they “would benefit those in housing need” and the scheme would “make the best use of land” as it would be developed on brownfield land.

The deputy mayor of London for Housing Tom Copley said he was “delighted” with the decision.

I’m delighted that the Planning Inspectorate has given the go ahead to @TfL’s proposed development on the Arnos Grove station car park. 162 new homes (40% AH) will be built in a beautiful scheme that enhances the setting of the gorgeous Art Deco station. https://t.co/3KvBeRJR34

Enfield Council did not wish to comment due to purdah rules in the run up to the local elections.