Levitt Bernstein has been given planning permission for a £22m affordable housing development in Newham designed to Passivhaus standards.

The 65-home Plashet road scheme will include 39% family dwellings and a nursery, and has been designed by a project team including susatainbility consultants Etude, M&E engineers Max Fordham and structural engineers Heyne Tillet Steel.

It has been awarded £6.4m in GLA funding with the rest of the scheme funded by Newham council, which is the developer. All the homes will be let at the London affordable rent level and the scheme is expected to complete in 2022. 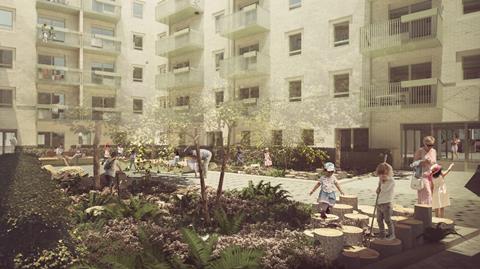 Levitt Bernstein chairman Gary Tidmarsh said that it has been designed to maximise natural heat and light to reduce energy consumption, with most balconies, living rooms and bedroom orientated towards the south and west to optimise sunlight.

All the flats will also be dual aspect, allowing air to flow through the flat to manage summer temperatures, while front doors and external galleries have been orientated to overlook the internal courtyard to foster a sense of community for residents.

Windows have also been scaled down to limit overheating during the summer, with the window openings surrounded by brick insets to increase their apparent scale.

The window design anticipates proposed building regulations included in a government consultation document in January which would see housing schemes in the capital fitted with much smaller windows than the rest of the UK to reduce overheating during warm summers.

The draft regulations proposed that new London homes with windows on opposite facades cannot have a window area greater than 13% of the floor area, which would result in windows up to 60% smaller than elsewhere in the country.