Morgan Sindall has reported a 53% increase in revenue from its partnerships housing business Lovell.

Its operating profit increased 476% year on year to £12.1million and its operating margin jumped 1.2 percentage points to 4.5%, pushing the firm closer to its medium-term target of 6%. Its return on capital employed (ROCE) was 17%, up from 9%. Its target for ROCE, which measures the efficiency of capital used, is 20%.

The firm completed 815 homes including open market sales and social housing, with the average sales prices increasing 6.9% to £232,000.

Lovell’s secured order book as of the end of June was £1.48bn, an increase of 2% on the figure for the previous year. Its mixed-tenure order book was 1% down on the same period in 2020, however its contracting order book increased 8% to £582m 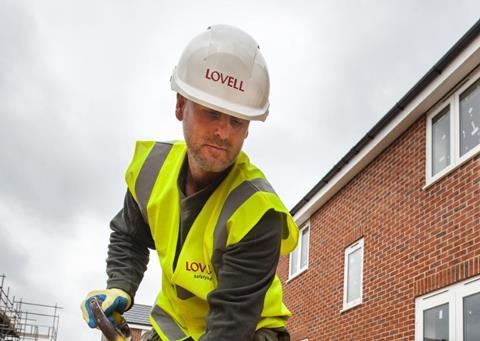 In the period, the firm signed a £120m joint venture agreement with housing association Abri to build 500 homes in Weymouth and won a contract to build an £85m, 528-unit scheme to build one of Wales largest regeneration schemes on the former Whiteheads steelworks in Newport.

It also won contracts to build a £50m, 211 unit scheme at Tolworth for Guinness Partnerships, entered a joint venture with Together Housing Group to deliver 650 units in Pendleton, Salford; signed a contract with Norfolk County Council-owned Repton to build 400 plus homes in Norfolk and was appointed onto the Your Housing Group framework, including the initial award of a £25m, 216 unit scheme at Edge Lane, Openshaw.

Lovell’s secured order book as of the end of June was £1.48bn, an increase of 2% on the figure for the previous year. Its mixed-tenure order book was 1% down on the same period in 2020, however its contracting order book increased 8% to £582m.

Steve Coleby, managing director of Lovell, said: “Our half year results reflect the continued hard work and commitment of the entire Lovell team in the delivery of partnership homes. With the addition of several more strategic partnerships we have increased our orderbook and created a great platform for further growth.

The improvement in Lovell’s performance follows renewed interest in the sector and among investors in the partnerships housing model. Countryside last month announced it is winding down its housebuilding division to concentrate on partnerships.

Morgan Sindall’s overall profit and revenue in the first half had beaten its pre-pandemic numbers filed in 2019, up 48% on the £35.5m recorded two years ago when revenue was £1.4bn.

Its average daily net cash position nearly doubled to close to £300m in the first half as the firm confirmed it had turned in record interim results this morning.

The results come just over a year after Housing Today revealed the business had an aim to double annual turnover to £1bn.