Master developer of the entire quarry site Henley Camlan is enabling the development of over 6,000 homes in total at Ebbsfleet Garden city 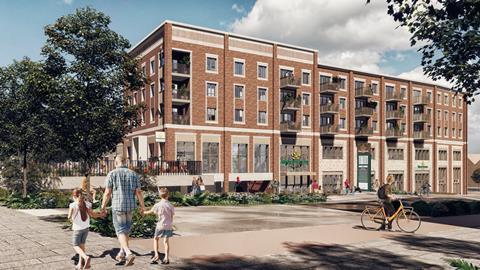 Henley Investments has submitted an application for 81 affordable homes, that will be part of the first phase of the mixed-use district centre of Ebbsfleet Garden City.

The homes have been designed by architect HTA and will be built with a nursery, gym, extensive public realm and a new 30,000 sq ft Morrisons.

This first phase will have a GDV of £32m, while the whole district centre will be worth an estimated £150m. Henley said construction should start “soon”.

Warwick Hunter, managing director for development and asset management at Henley, said: “Henley is now bringing forward a state-of-the-art community hub building, a new high street and over 500 residential dwellings as part of the district centre.”

Mark Taylor, head of acquisitions at Morrisons, added: “Morrisons has entered an agreement with Henley and look forward to the construction works starting shortly.”

The government announced plans to create a new locally led garden city at Ebbsfleet on former quarries in 2014. The city should provide up to 15,000 new homes in total on brownfield land, with Henley being just one of the developers.