The Bank of England’s decision to raise the interest rate from 1.25% to 1.75% today is likely to slow the housing market, property firms have said.

The bank said it had raised the rate, which is the biggest single jump in 27 years, in an attempt to bring down inflation. Rates have risen to their current level from just 0.1% only eight months ago. 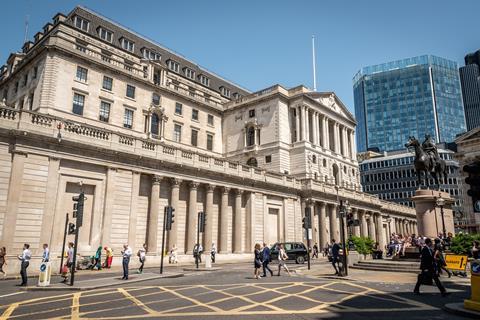 The bank estimated inflation will rise to about 13% in the next few months. In June prices had gone up by 9.4% compared to a year ago.

The main reason for higher inflation is because of rising energy prices, particularly of gas after Russia’s invasion of Ukraine, the bank noted.

The decision comes amid signs the housing market is already cooling in the wake of the cost of living crisis. Earlier this week both Nationwide and Zoopla put the latest monthly house price growth at just 0.1%.

Simon Gammon, managing partner at Knight Frank Finance, said: “Those who are looking to buy are realising once obtainable properties are now out of reach.”

Tom Bill, head of UK residential research at Knight Frank, said rising rates will dampen demand in the UK housing market. However, he predicted the impact on the housing market would be “gradual”.

“There won’t be a cliff edge moment”, he said. “As rates and supply normalise, the current period of double-digit house price growth will come to an end.”

Frances McDonald, research analyst Savills, noted that these rate rises will have the “greatest impact on new entrants to the market and those on variable or tracker mortgages”. But she added: “They will also affect those wanting to trade up the housing ladder, particularly given the strong price growth we’ve seen of late.”  She said the “successive rate rises are undoubtedly contributing to slowing house price growth” but Savills still expect house prices to rise by 17.4% over the next five years.

Tim Bannister, Rightmove’s housing specialist, said: “First-time buyers trying to get onto the ladder are currently facing average monthly mortgage payments that are 20% higher than the start of the year due to rising interest rates and asking prices.” He predicted: “As rates creep upwards and with the wider economy uncertain, people may look for some financial certainty by locking in longer mortgage terms before they rise again.”

Iain McKenzie, chief executive of The Guild of Property Professionals, pointed out: “The consecutive interest rate rise could make potential buyers more hesitant about taking on a mortgage”. He said: “If it does, we will likely see property prices cool off in order to entice more people to buy.”

Lauren Atkins, managing director of developer The Malins Group, said the rise “together with sharp increases in house prices, will seriously impact the property market, not just for first time buyers”. She forecast: “By the fourth quarter we will see the full impact of the cost of living crisis, coupled with recession”.

The Bank said it expected the size of the UK economy to fall over the next year. Since December 2021 the interest rate has risen from 0.1% to 1.75%.

In March 2020 the interest rates were cut to 0.1%, their lowest level ever to limit the economic crisis caused by the covid pandemic.