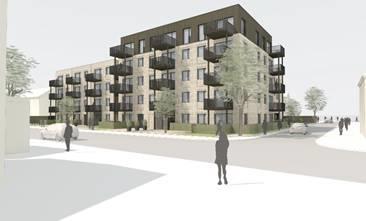 Housebuilder Bellway is to seek planning permission from Lewisham council in south-east London to build 60 homes on the former site of an infant school in the borough.

The old site of Our Lady & St Philip Neri infant school, which has relocated to the nearby junior school site off Sydenham Road to form a new primary school, was purchased with a view to building 60 apartments across three blocks ranging from three to five storeys in height.

Bellway said 35% of the newly built homes (pictured) would be affordable.

The land, off Mayow Road, was sold to the housebuilder by the Roman Catholic Archdiocese of Southwark CIO.

Bellway is carrying out a community consultation exercise before finalising its detailed plans for the site.

A planning application is due to be submitted to Lewisham council “in due course”, it added.