The professional institute for surveyors has proposed new guidance designed to vastly reduce the scope of buildings subject to EWS1 fire safety assessments.

The safety assessments, introduced by the RICS in 2019 in a bid to provide reassurance to lenders and insurers of high-rise blocks, have contributed to a major blockage in the housing market after a government rule change meant insurers and lenders started requiring them on flat blocks regardless of height. 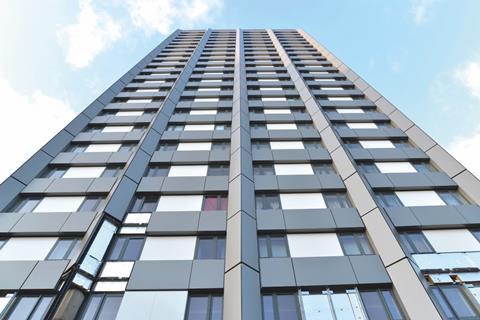 The proposals from the RICS follow an agreement between the body and housing secretary Robert Jenrick in November which the government said would free up to 431,000 leaseholders from the requirement to undertake the EWS1 assessment. Jenrick said at the time that the new measures would provide “certainty” for homeowners who have “felt stuck in limbo” during the crisis.

The proposals, which were issued for consultation on Friday, make clear that buildings of more than six storeys should not need the assessment unless they either have a cladding system or have vertically stacked balconies constructed from flammable material.

Buildings of five or six storeys should not require the form unless they have a cladding system covering more than a quarter of the surface of the building, or if they have any cladding at all comprised of Grenfell-style ACM/MCM (Aluminium/Metal Composite Material) panels, or vertically stacked flammable balconies.

In addition, buildings of four or fewer storeys should only need to receive an EWS1 sign-off if there are ACM/MCM panels on the building.

The confusion over the EWS1 safety assessment system has been credited with trapping thousands of homeowners in unsellable properties as they have been unable to get experts to undertake the assessments.

This situation has been exacerbated by a dire shortage in the number of fire safety professionals qualified to sign the forms – just 291 according to the housing ministry.

The RICS said the new guidance, when brought in, should help by setting out a consistent position for valuers carrying out mortgage valuations, on when EWS1 forms should be requested for buildings with cladding, to avoid unnecessary delays.

Ben Elder, head of valuation standards at the RICS, said the introduction of the EWS1 assessment has been affected by changing government guidance and insurance industry practice, and was “never intended to hold up the market, indeed without it, no one would be moving”.

He added: “There will clearly still be many cases where an EWS1 form is necessary, but the guidance and insight resulting from this consultation will enable us to continue to work with stakeholders, including the government, to find solutions to help speed up the process for remediating these buildings.”

The RICS said the guidance note was subject to final approval by the institute’s independent standards and regulation board, chaired by Dame Janet Paraskeva. Dame Janet urged as many people as possible to respond to the consultation, and said: “Public confidence in the safety of buildings with external cladding systems is at an all-time low.

“The purpose of the guidance is to create consistency, and to support best practice, in order to ensure that properties affected are properly identified and those unaffected by unsafe cladding are not unnecessarily impacted.”

The news came as the Sunday Times reported that the government has included a “gagging clause” on applications to its £1bn cladding remediation fund, preventing those applying for the fund from talking to the press without government approval.

The newspaper reported that, even where there was “overwhelming public interest” in an issue being raised publicly, applicants must inform the government before notifying the press.

In addition, the Sunday Times published a letter signed by 45 MPs and a host of peers and industry leaders “to support leaseholders living in high-rise private buildings who are facing substantial retrospective costs to replace unsafe cladding”.

The letter said: “No leaseholder should suffer anxiety, facing costs well beyond their ability to pay. Remedial work on these buildings may cost a total of £15bn — nearly 10 times the funds now available.

“The government has the responsibility and resources to rescue the living victims of the cladding scandal. Everyone seems to be at fault except those now lumbered with impossible costs.”

The housing ministry told the newspaper: “The terms set out are standard in commercial agreements. To suggest otherwise is misleading. We want a constructive working relationship with building owners who apply.”