Designs for a major £450m regeneration of a former industrial area of Sunderland have been unveiled.

The masterplan for the new city centre district, which spans both sides of the river Wear, has been announced by a team consisting of architects Faulkner Browns, Proctor & Matthews, MawsonKerr and landscape architect Camlins. 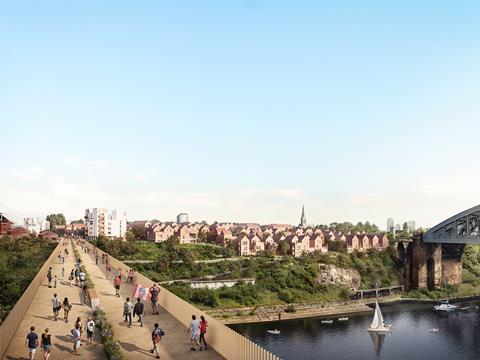 The scheme will include new bridges and homes

Designed for Sunderland city council and its development partner Igloo Regeneration, the scheme is planned for a stretch of riverside close to Sunderland FC’s Stadium of Light ground.

Faulkner Browns has been tasked with designing the project’s mixed-use schemes, while Proctor & Matthews has designed the residential districts with local practice MawsonKerr assisting on the 126-home Vaux neighbourhood of the masterplan.

The Flanagan Lawrence-designed auditorium, which will be housed in the city’s 1907 former fire station building, is already under construction.