Countryside charity the CPRE has called for new funding and the introduction of a “comprehensive brownfield first” policy into national planning policy as it published research showing the decline in brownfield housing development.

The CPRE’s State of Brownfield report said the dwindling use of brownfield sites was contributing to a “tragic” loss of green fields, with the proportion of sites on council’s brownfield land registers which had planning permission the lowest on record.

The report also highlighted government data showing that the proportion of the land changing use to residential which came from brownfield has collapsed from a peak of 70% in 2008, to just 38% in 2017, the most recent year for which the data is available.

The CPRE said that this decline is despite the fact the volume of identified brownfield sites is actually growing rapidly, with the report finding enough brownfield land for nearly 1.3m homes, up sharply from last year. 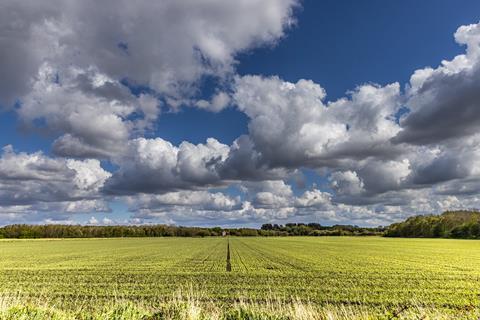 The CPRE says councils in Manchester are proposing the development of Carrington Moss, in the city’s Green Belt

At the same time, the volume of greenfield land changing to residential has risen by 146%, as housebuilders have been permitted to focus their efforts on simpler and often more profitable greenfield sites.

Housebuilders typically argue that the existing use value of many brownfield sites, plus the cost of remediating them, makes many unviable to develop without significant government subsidy.

The countryside charity called for the National Planning Policy Framework (NPPF) to be amended to make clear that the full potential of brownfield land should be harnessed “before any greenfield or Green Belt land is considered” for development.

While the CPRE report didn’t make any direct comment on the difficulty of developing many brownfield sites given the lack of available government subsidy to make them viable, it also called for councils to receive extra funding for developing brownfield sites, in order “to allow for brownfield land to serve the needs and regeneration of the north and midlands”.

Emma Bridgewater, president of CPRE, said a brownfield first policy was “sound good sense”. She said: “It is wasteful and immoral to abandon our former industrial heartlands where factories and out-dated housing have fallen into disrepair. Developing brownfield is a win-win solution that holds back the tide of new buildings on pristine countryside and aids urban regeneration at a stroke.”

West Midlands Mayor Andy Street, who has tried to promote a “brownfield first” policy in the region since being elected in 2018, speaking in response to the report, said: “The simple fact is there is no excuse to destroy the countryside while so much brownfield land is available for housing, which is why in our region we use the cash we’ve won from Government to pay to clean up derelict industrial land.”

A spokesperson for the Home Builders Federation said: ”If we are to meet the country’s acute need for more housing we need a choice of sites in a wide range of locations.

”For obvious reasons brownfields will be more concentrated in some areas than others - and that may not align with where housing need is greatest or where people want to live . Rather than merely counting the potential of brownfield sites we need actual strategies to bring them forward in a viable way.”

The report follows Boris Johnson signalling a desire for more development on brownfield land in his speech to the Conservative party conference in October. He said there is a lot of room to build homes for young families, “not on green fields, not just jammed in the south east, but beautiful homes on brownfield sites, in places where homes make sense”