A joint venture between two of the wealthiest property developers in the world and one of Canada’s largest pension funds has begun building work on a £670m private rental housing scheme in east London. 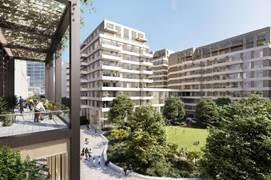 The Cherry Park Partnership is a joint venture between shopping centre developer Unibail-Rodamco-Westfield, Vancouver-based QuadReal Property Group and Canada’s Public Sector Pension Investment Board (PSP) and aims to build around 1,200 homes next door to the Westfield shopping centre in Stratford.

PSP and QuadReal will each take a 37.5% stake in the Cherry Park scheme, with Unibail-Rodamco-Westfield – which is also the development and asset manager – holding a 25% share.

The jv claimed the development to be one of the largest single-site PRS schemes in the capital.

When completed, expected in 2023, it is expected to feature a range of one to four-bedroom homes in various towers and mansion blocks. Leisure facilities and public realm areas will also be provided.

The venture’s partners claimed the scheme would deliver “significant benefits” to the local community, including the equivalent of a nearly a third of Newham’s net housing completions between now and 2029, as per the draft new London plan.

A report compiled by consultants Volterra suggested between 2,000 and 3,000 will able to live on the development once it is complete.