Barking and Dagenham council is leading a safety review it hopes will inform local authorities on what to do in the event of a major residential fire. 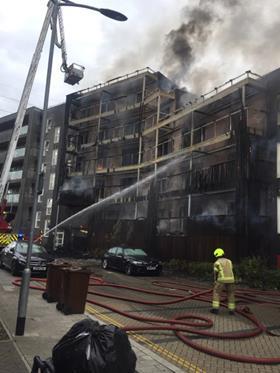 The east London council said with the ongoing scrutiny around building safety intensifying, it wanted to learn lessons from the fire at Samuel Garside House, a block of nearly 80 flats at Barking Riverside, on the south side of the borough.

No fatalities resulted from the blaze in June last year, which was said to be spread by timber-clad balconies. But affected residents “were traumatised” by the fire, according to the council.

The five-storey block had been built by Bellway and was owned by freeholder Adriatic Land.

Barking and Dagenham council said it was commissioning Sir Steve Bullock, chair of the Housing and Finance Institute and former Lewisham mayor, to lead the investigation into what can be learned from such a fire.

The council said the review was likely to make recommendations that could be could be put to central government to help give local authorities “more effective powers in such emergencies”.

Darren Rodwell, leader of Barking and Dagenham council, said the local authority was still working with a range of organisations “to make sure our residents feel safe in their homes”, despite the council not owning the affected block.

Rodwell said the review would call for evidence from residents directly affected by the Samuel Garside fire, as well as organisations “with different interests in ownership or management of the block” and the emergency services.

The review’s findings are expected to be published in the summer.