Government auditors have slammed the ‘unacceptable’ delivery of the £1.5bn Green Homes Grant scheme designed to help fund 600,000 green domestic retrofits, but which was ultimately closed this spring after paying out just £36m in vouchers.

A National Audit Office report released today concluded the scheme was delivered to an over-ambitious timetable and “not executed to an acceptable standard”, with NAO head Gareth Davies describing it as “rushed”. 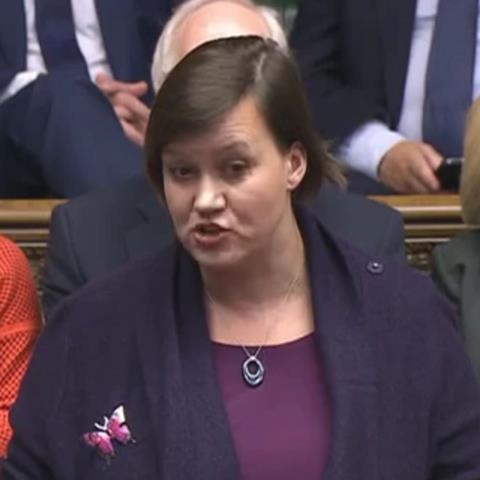 MP Meg Hiller, chair of the cross-party Public Accounts Committee (pictured), said the scheme was “set up to fail”, with its design taking “little account of supplier and homeowners’ needs”.

The NAO report said the scheme, delivered by the department for Business, Energy and Industrial Strategy (BEIS), was currently estimated as likely to fund just 47,500 energy improvement measures, less than 10% of the 600,000 forecast, with a total scheme spend of £256m.

The report blamed the failure on the rushed implementation of the scheme, which was opened just 12 weeks after being announced by chancellor Rishi Sunak as a post-lockdown stimulus measure.

Sunak had said the whole £1.5bn of subsidy should be spent in just six months.

This gave the department just three months in which to design the Scheme, consult with stakeholders and procure a grant administrator. The report found that none of the potential grant administrators approached by the department felt the timetable for setting up a digital voucher system was deliverable, however the one chosen, ICF Consulting Services, said it could have a system up and running in the quickest timeframe. In the event, the system was not fully functioning at the point the scheme was closed in March this year.

The average time the administrator took to issue a voucher under the scheme, following application, was 137 days, with more than half of applicants either failing the application process or withdrawing their application before a decision was taken.

The NAO also revealed that the department’s accounting officer decided to go ahead with the scheme despite the department’s investment committee having rejected it as too risky. This was justified on the basis the scheme was “intended to play a key part in the government’s response to mitigating the pandemic’s economic impacts”, and would deliver value for money in any event, even if not all the cash was spent.

However, ultimately, the scheme incurred administration costs of more than £50m – equating to more than £1,000 per house, a number Hiller described as “astonishing”.

Hillier added: “The government cannot hope to achieve its net zero ambitions if it doesn’t learn the lessons from this botched scheme.”

The report found that despite one of the lessons from previous energy schemes being that schemes should be designed following a proper evaluation of stakeholders’ views, the scheme was announced in July 2020 without any consultation at all, with the department only consulting with installers afterwards.

Given the scheme design and rapid timetable, the NAO found that some installers were reluctant to invest in gaining the appropriate accreditation to take part in the scheme, meaning some homeowners were unable to find installers.

A BEIS spokesperson said the Green Homes Grant was designed as a short-term economic stimulus and delivered during an ongoing pandemic. “Despite this, and challenges with delivery, 99.9% of applications have now been processed, meaning almost 80,000 upgrades to homes,” the spokesperson said.