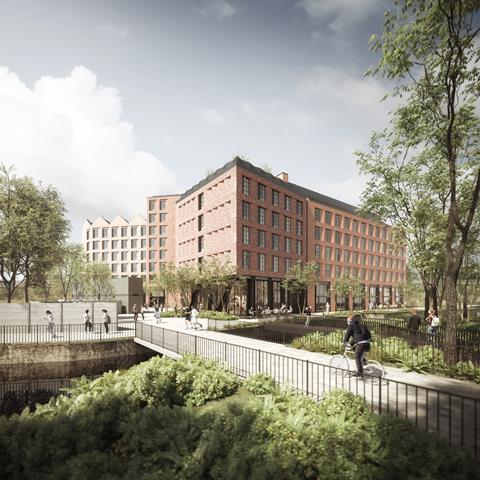 The firm designed the buildings (pictured), ranging from six to eight storeys, for co-living specialist The Collective.

The Garratt Mills development in Earlsfield is on the banks of the River Wandle in Wandsworth and will feature 292 rooms, plus a cinema, communal kitchens, co-working spaces, a gym and a library and what the architect called “adaptable workspaces”.

Work is on the scheme due to start towards the end of next year, with completion expected sometime in 2022.

The Collective operates 8,000 rooms in a number of co-living spaces in the UK and overseas.

It has developments at Old Oak Common in west London and in Canary Wharf.

Assael director Tim Chapman-Cavanagh said his firm’s design sought to “emulate the importance of the river, drawing on its industrial roots”, while opening up the space to residents and the wider community.

“By drawing on our experience with build to rent, we were able to ensure that the internal design was functional and efficient to operate, while creating plenty of detailing and features to draw on the site’s heritage,” he added.

Assael has designed a number of build-to-rent schemes, including Union Wharf, a 249-home scheme in Greenwich, south east London, for Essential Living, and a 376-home development in Bristol’s Temple Quarter district, for Legal & General.