A Section 106 agreement gave rise to a scheme of housing, a green square and a nursery in London’s Lambeth 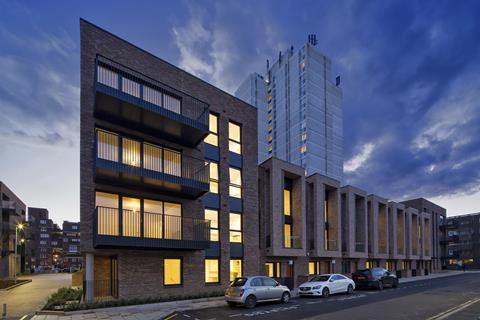 New family houses and apartments, a green square and a children’s nursery, all in London’s SE11 postcode: the delivery of a development with these ingredients is incredibly rare in the heart of the capital today. Lollard Street is even more remarkable because all this was born from a Section 106 agreement.

This 89-home development is being heralded as an exemplar social housing scheme. Lambeth council and developer Braeburn Estates – a joint venture of Canary Wharf Group and Qatari Diar – have demonstrated how public and private sectors can work together effectively using the S106 mechanism, not only to deliver affordable homes but also to improve existing council housing estates.

The catalyst for Lollard Street was the redevelopment of the Shell Centre complex on the South Bank of the Thames, now renamed Southbank Place, into an office and residential scheme. While some affordable homes were to be provided onsite, the local authority acknowledged the need to look offsite too. “Shell’s location, being on the riverside and having high land values, made it difficult to do it all onsite,” says councillor Matthew Bennett, cabinet member for housing at Lambeth council. “That was a departure for us. This was the first time we had done large-scale affordable housing offsite”.

The council had a clear message to the developer from the start. “We’re quite experienced in knowing what we want to get out of our relationships with developers,” says Bennett. The council’s wishlist included extra care homes for elderly downsizers – which would ultimately be provided on site at Southbank Place – and large family homes, a big ask for central London.

The council wasn’t alone in recording a first on the project; this was the first social housing scheme by Canary Wharf Group and Qatari Diar. Braeburn had not wanted to make a commuted payment to the council, explains Howard Dawber, managing director of Canary Wharf Group. “We looked at the option of writing a cheque, but we thought we could do something better. That was partly about control of delivery and partly about what was good for the community.” The developer contribution, therefore, took the form of construction of affordable housing on a council site, with Canary Wharf Contractors doing the build. 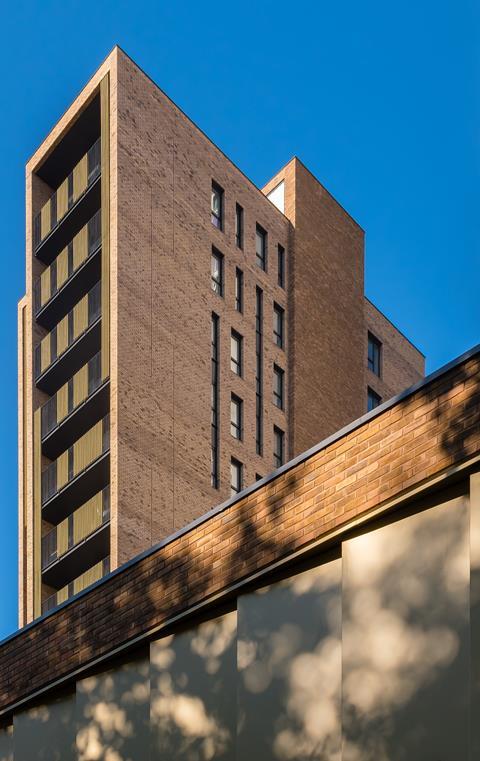 The developer team, together with architect Darling Associates, scrutinised council-owned sites within a mile radius of the Shell Centre that could have potential for infill development or similar. Twelve sites were whittled down to a shortlist of five, one being the Ethelred Estate. “The Ethelred Estate site was the most complicated, but it was where we could potentially do the most good and deliver the highest numbers,” says Dawber.

Ethelred was a child of the late 1960s, its design having four 22-storey tower blocks grouped around a multi-level car park – although one of the towers was later demolished and partially redeveloped with private housing. The car park was used by only 11 residents and was effectively blighting the environment; it was a focus for anti-social activity and inhibited easy movement around the estate. The car park had one asset: the nursery and children’s centre located in temporary buildings on its roof, which served 76 local children and had an Ofsted “outstanding” rating.

The site had so many constraints, you could see it would deliver good architecture by confronting them

“The site had so many constraints, you could see it would deliver good architecture by confronting them,” recalls Damion Burrows, director of architect Darling Associates. “The whole ideology of the site was defunct, and that presented the opportunity to repair the urban fabric, by taking away the car park.” Its removal allowed the architect to encourage people movement through to an adjacent under-used park, create new routes to bring transparency and connectivity to the place and create a purpose-built facility to house the nursery.

Importantly, it also allowed for the introduction of 15 four-bedroom townhouses on three sides of the car park’s footprint, “bookended” with four-storey apartment blocks. The architect initially looked at creating duplex-style “houses” at the base of apartment buildings instead. “But we had some debate in the office about it,” says Burrows. “For us, those wouldn’t be houses.” Remaining car park space is landscaped to provide gardens for the benefit of new and existing residents.

Delivering the homes as well as open space has inevitably meant building up. The architect opted to do that with a seven-storey building and a 16-storey blade tower, the latter sitting between two existing tower blocks. “We had just 8m between new and existing,” says Burrows. As the two existing towers have blank elevations facing the new addition, existing residents do not, however, overlook it. In fact, residents now enjoy a better aspect with the improved setting, says Burrows: “Architects talk about the fifth elevation – the rooftops. Here everyone used to look out of their window and down onto a car park. Now they look out onto green and brown roofs, play areas, paths and greenery.”

Everyone used to look out of their window and down onto a car park. Now they look out onto green and brown roofs, play areas, paths and greenery 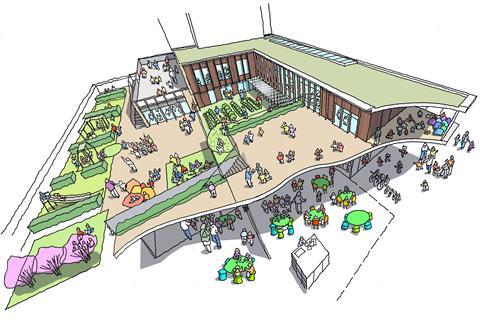 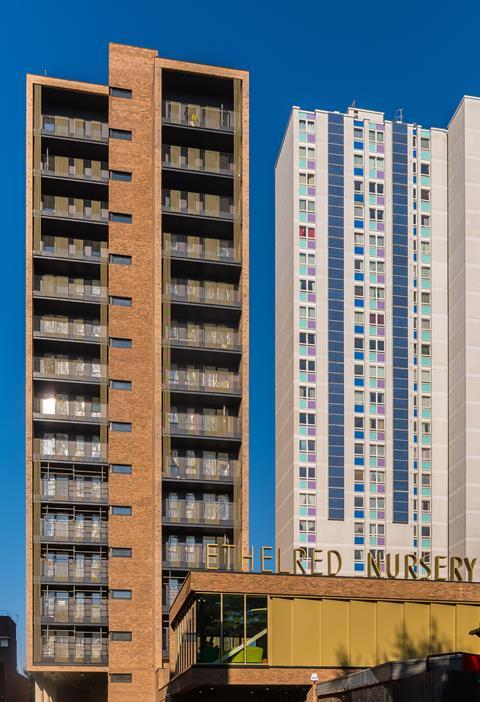 How the deal worked out

The scheme, which was handed over in January, exceeded the affordable housing baseline initially set by Lambeth council for Lollard Street, explains Canary Wharf Group’s Dawber: “Thanks to Darling Associates’ design, we managed to get 89 units on the site, when we only needed 70.” The social homes have been made available at council-level rents by council housing company Homes for Lambeth, with a local lettings policy giving priority to existing estate tenants in need. The surplus 19 units were sold to Lambeth at cost price, and it chose to sell these on the open market to secure further funding for housing for Homes for Lambeth.

The agreement required construction of the Shell Centre site and Lollard Street to start at the same time, to ensure early delivery of the affordable housing, with pre-set triggers requiring proportions of affordable homes to be ready for occupation ahead of private ones. Dawber says all these triggers have been met ahead of schedule.

While the council retained ownership of the site, Braeburn Estates took on all construction risks and costs. As construction costs rose during the project, Dawber says it has had to swallow some additional costs, but there were also efficiencies: “We’ve had two sites within half a mile of each other so that presents synergies. You can borrow a crane or procure concrete more cost-effectively.”

At a senior level the council bought into this. At an operational level they held our feet to the fire. It was a good, frank, honest relationship

The council says it enjoyed a good working relationship with the development team, and Dawber praises the council in return: “At a senior level they bought into this. At an operational level they held our feet to the fire. It was a good, frank, honest relationship and was very delivery focused.”

The deal has enabled the regeneration of an estate that was in need of improvement. “The only other way to redevelop that estate would have been with someone delivering a load of private housing there, and that wouldn’t have been right,” says Dawber. “By doing a social housing-led redevelopment and taking the opportunity to fix the things that had gone wrong at the start we’ve made a much nicer place to live.”

This agreement relied on Canary Wharf Contractors being appointed to build the scheme without going through a competitive tender process, possible when this project began but not now under public procurement rules. But the model needs to be re-applied, believes Dawber: “I know places in London which, although they are not in a terrible condition, can’t be changed because the economics are never right. I would love to see councils asking developers what they could deliver, rather than us writing a cheque.” 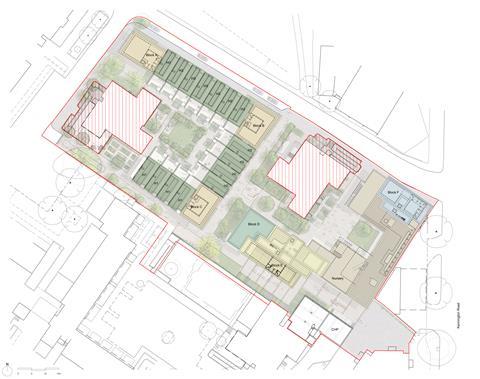 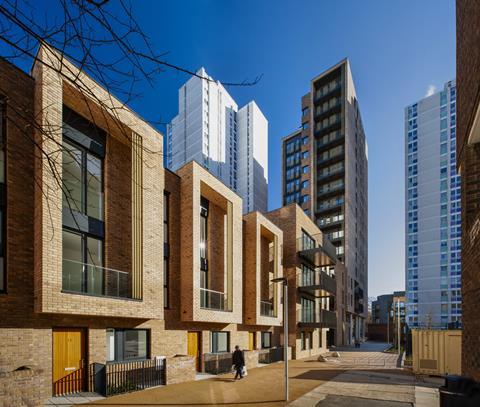