Landowner Oxford city council could have sold the site and walked away with a tidy sum, but instead it entered an investment partnership with developer Grosvenor and the pair are creating an exemplar of quality placemaking 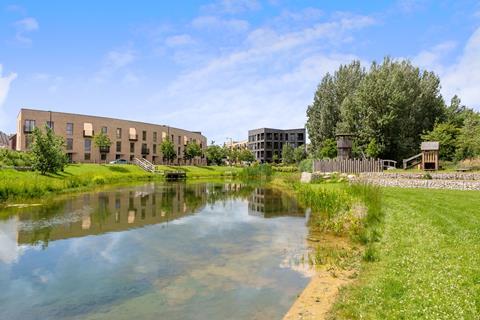 A 90-acre allocated site three miles from the centre of Oxford, a city where average house prices are around 12 times the average wage, is a peach of a development opportunity. And that’s borne out by the fact that in this uncertain market housebuilding and home sales are progressing steadily at Barton Park.

When complete Barton Park will have 885 homes and amenities, flanked by a linear park that is already in place and flourishing. Cycle and walking routes and outdoor gym equipment are the most obvious manifestations of a focus on health and wellbeing in the masterplan by lead designer Terence O’Rourke. Unusually that focus extends beyond the new development to the existing neighbourhood of Barton, and has earned this area the status of healthy new town under an NHS England pilot programme.

The development site was largely former grazing land, adjacent to the existing suburb of Barton, a 1,500-home estate built by the council in the 1940s. In contrast with much of the rest of Oxford, Barton is among the 20% most deprived areas of England, which has health implications for its residents. For the council development therefore presented an opportunity to deliver homes, address inequalities in the existing suburb and show leadership to developers working elsewhere in the city, although that also brought significant responsibility. “This is the only site of any size allocated in the city and the council owned it, so it was really important to get the options right,” says Jane Winfield, head of regeneration and major projects at the council. The council began exploring those options more than a decade ago, taking into consideration not only financial benefits, but delivery. “We looked at selling the land, but were concerned that would lead to it being landbanked,” adds Winfield.

The original objectives of the partnership have filtered down into choicemaking. From the earliest stage, design was really important. The level of detail in our sign off extends to scrutiny of the brick.

An investment partnership offered the potential to contribute to council funds while also allowing the council to retain control and bring in development skills and knowledge. The council chose its partner via a competitive process, but one that was conducted outside of OJEU constraints which would have been a disincentive to bidders, Winfield says. “We had a very strong legal team on local authority procurement and they kept us on the straight and narrow,” she adds. “This was the first partnership of this nature - it was a big ask of our legal and procurement teams and they had quite fixed requirements. At the time, this was perceived as having risk.”

As a master developer, Grosvenor was a natural partner for the council. “If you’re in bed with a housebuilder, their focus is on building houses. A master developer is interested in the whole place,” says Alex Robinson, director of development, strategic land at the company. Under the arrangement, the local authority brought the land, while the master developer injected the cash and expertise to take the site through planning. Robinson adds, “We’ll get outline planning permission focusing on the quality of the place and the delivery of the infrastructure - that all adds value, allowing the housebuilders to do what they do best.” The joint venture, Barton Oxford, is a 50:50 limited liability partnership with equal numbers of board members from the two partners.

By the time the JV was established, the council already had an area action plan in place for Barton, setting out key aspirations for new and existing communities to be integrated and for the quality and tenure of new homes. The council generally requires 50% of homes in proposed developments to be affordable, with 80% being for social rent and 20% for shared ownership or intermediate rent. For Barton Park, however, the council loosened its own requirement because of infrastructure costs, which included the need to put pylon cables underground. “In the event we got the members to agree to 40% for viability reasons, and that is all for social rent,” says Winfield. “No one should underestimate what a difficult decision that was for the members”.

The high infrastructure costs came largely from the need to install cables and drainage pipes across the site. “We spent three years on infrastructure delivery,” says Winfield. “A small design change would have a knock-on effect because of the changes in level across the site and the pipes and cables in the ground.” The linear park with its naturalistic planting, preserved hedgerows, play spaces and ponds incorporates a sustainable drainage system, connected to a network of underground pipes.

We’re looking to deliver up to 2,000 homes and on the back of the relationship with Grosvenor, we’ll consider whether we should enter a joint venture.” 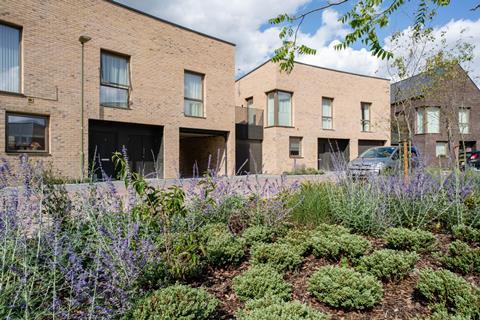 Today, the first land parcel of 237 homes, called Mosaics and being delivered by housebuilder Hill, is close to build out. This phase includes townhouses and apartments in four character areas, designed by Pollard Thomas Edwards and Alison Brooks Architects. As for all housebuilders working on the site, Hill’s designs for homes and their landscape had to meet the JV’s approval. Robinson explains: “We have the design code but don’t rely on that alone because it needs to be applied by a planning officer. So housebuilders have to provide indicative designs when making an offer for a land parcel and we reserve the right to approve detailed designs.”

“The original objectives of the partnership have filtered down into choicemaking. From the earliest stage, design was really important,” echoes Winfield. “The level of detail in our sign off extends to scrutiny of the brick. For the first phase we looked in some detail at the angle of the Gladstone Crescent terrace of houses and the placement and size of the windows. At times we wondered if we were taking too long.” Hill’s land parcel is the high profile gateway to the site, but Winfield says the same scrutiny is going into the designs put forward by housebuilder Redrow for the second parcel of land, which are created by CZWG. “The aspiration is that we don’t let it dumb down,” she says. “We have also spent a lot of time on new home designs abutting Barton. We didn’t want the new homes turning their backs on Barton.”

Such constraints could have deterred housebuilders from bidding for land parcels, which Robinson acknowledges. “Hill came in strong on the first phase, but there was a perception that Barton wasn’t the best part of Oxford. We’ve had to find housebuilders we can work with and that’s coming good now. There is strong interest in later phases. It takes time to get to that point and build value.”

The area’s healthy new town status is also helping to bring broader change to Barton and integrate emerging and existing communities in what the JV describes as a ‘One Barton’ approach. Funding from the NHS England Healthy New Towns programme has enabled Barton’s existing community centre to host cookery classes and other activities aimed at promoting healthier lifestyles. Walking trails connect the new Barton Park and the existing Barton, while existing amenities on the Barton Park site, including football pitches and allotments, are being not only retained but enhanced, as evidenced by the new sports pavilion, designed by David Morley Architects.

The new neighbourhood and its homes are created for sustainable living, with homes designed to Code for Sustainable Homes level 4, 20% of energy set to come from renewable technologies and the site delivering biodiversity net gain with the help of onsite measures and local offsetting. Car parking, however, has proved a thornier issue, says Robinson. “There has been some navel gazing about constraining it to promote transport use and reconciling that with homeowners’ aspirations for parking, just as we’ve had to reconcile the aspiration for shared space with the concerns of highways engineers. But we’ve got all we wanted in incorporating shared space while allowing people to still drive their cars.” Parking spaces are provided under apartment blocks and in restricted parking zones. 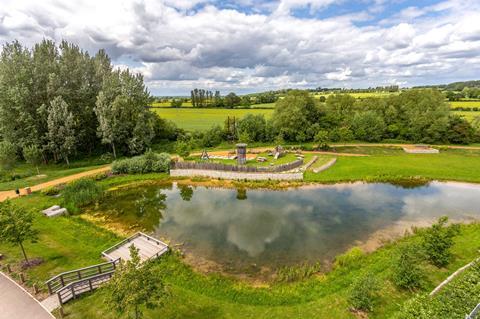 For this, as in all other aspects, the JV’s decision-making has been driven by a unified approach. “The objectives of the company were clearly set out from the start on things like maximising housing, affordability and links with the existing community, so when we are making decisions we have got the same views. That’s why it works,” says Robinson.

With Hill having demonstrated the site’s sales potential and residents now in occupation, construction activity on site is picking up pace. A school is under construction and further amenities, including a convenience store and coffee shop, are set to follow. Redrow is starting construction of 207 homes and the JV expects two or three more land parcels to be released to housebuilders to complete the scheme. For Grosvenor, the scheme has raised questions about economies of scale, says Robinson: “It would be great to have another 900 homes, because the effort would be the same for 2,000. That has changed our strategy to say bigger is better for us. We could have sold sites three or four times over.”

The JV’s success has prompted other councils to beat a path to Oxford’s door to find out how to follow its lead. The council has found the input required to do its share of running the JV intense, says Winfield, but it is nonetheless something it could be set to repeat. “The ability to design well and be quite dense is a lesson for us, and is something we’re applying to our own housing company,” she continues. “We’re looking to deliver up to 2,000 homes and on the back of the relationship with Grosvenor, we’ll consider whether we should enter a joint venture.”