Glasto: A lesson for housing in the 21st century

Music festivals can teach us a lot about positive placemaking 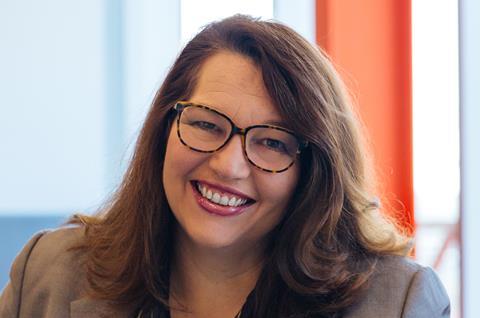 The Glastonbury festival may seem like a strange starting place for a discussion about new housing developments but I think it can tell us a lot about how to create good places. I’m not saying that every housebuilder needs to put a pyramid stage in a field in the middle of their site (although come to think of it, it would be rather fun to see more bandstands in pocket parks). Rather, I am saying that there is wisdom in crowds when it comes to creating good neighbourhoods – so the wide variety of music, art and cultural festivals that take place every year can teach us a huge amount about planning, city building and place-making that people want.

As festival-goers across the world flock to parks, fields and even remote deserts to participate in a wide variety of events, so temporary cities and towns spring up in their wake. At Glastonbury, a 900-acre site on Worthy farm hosts for one weekend a population equivalent to the size of Norwich. The residential neighbourhoods created by festival goers may only be made of tents and vans (so I’m definitely not making a point here about density) but they accommodate an economically and socially thriving community. The way they do so provides us with some important lessons about place-making.

I was put in mind of this when I looked at a photograph on Twitter today which showed how the strong environmental theme of this year’s Glastonbury festival had had an enormous impact on the amount of litter and number of tents left behind. The organisers’ determination to eliminate single-use plastics and to have people take belongings home, not only resulted in a massive reduction in waste but also served to illustrate the importance and effectiveness of some types of “top-down” land stewardship. It was important that festival goers were given a strong steer to behave in an environmentally responsible manner but it did not need punitive sanctions or heavy-handed regulation to achieve this; rather, an alignment of interests between the majority of eco-conscious festival-goers and the facilitation of appropriate behaviour. So, straight away there is a lesson in long-term land stewardship and community relations which many a would-be long-term place-maker would do well to heed.

Of even more interest to me though in this particular photo was not the evidence of what WASN’T left at Glasto (laudable though the lack of litter was) but by what WAS left. The temporary festival city had left a footprint in the grass. This footprint was a lesson in impromptu urbanism. Light-coloured patches showed where tents had been pitched and running between, around and through them were brown paths where the grass had been crushed or worn away by footfall.

The photo of Glasto looked like a really good, fine grain urban masterplan or groundplan of an old city 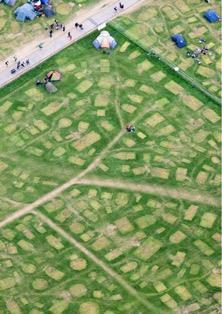 The photo looked like a really good, fine grain urban masterplan or groundplan of an old city. It showed major thoroughfares, avenues, side streets, alleys, back roads, squares and courtyards. The footfall on each thoroughfare was revealed by the extent the grass has been worn away. What resulted from the seemingly chaotic pitching of tents was a perfect little hierarchical urban network; a well-connected, permeable neighbourhood. Each path was a desire line, getting people from where they had pitched camp to where they wanted to be.

In this respect, my grass-plan of a festival neighbourhood was like almost any pre-industrial city. It obeyed the same unwritten rules which have applied across continents and across centuries. The unwritten rules of human habitation at density, when people gather together in close proximity, means that a citizen of ancient Pompeii would likely be able to recognise and navigate a favela in Rio de Janeiro or the streets of Dharavi in Mumbai, the old hutongs of Beijing or the medieval streetscapes of Florence. People the world over and through the millennia have organised themselves in the same way in order to enjoy cultural, social and economic exchanges with each other. Fine grain, messy, desire lines are the stuff of which cities are made.

The success of the city, or the place or the festival, it seems to me, lies in the interaction between those who control and steward the land and those who occupy it. The little grassy neighbourhood in my photo needed much more than just tents to work. In the same way, new housing development needs much, much more than just housing “units” to work. In the grassy Glasto city, there was economic exchange, rent was paid, cultural events and entertainment were created (big time!), shops, stalls, food and beverage were essential parts of the offer. We can’t ignore these things or separate them beyond walkable reach and expect places to work for people.

Of course, infrastructure was also key. Someone had to organise and provide toilets, showers, water, roads (in the form of gridded pathways) and to mastermind the whole thing. But this activity was iterative and interactive, there was symbiosis between the “top down” planning and the “bottom up” organisation of people for themselves and by themselves.

So, for me, this three-day music festival teaches at least three things about housing development:

And for those of you who might complain: “Ah, but the cost is prohibitive”. Yes, the first festival in 1970 made a small loss and now it costs about £22m to set up, stage and dismantle every year. But the annual revenue? £82m. For landowners and developers of new neighbourhoods, getting it right and participating over the long-term could become just as worthwhile financially.